HEEVAN, Kashmir — Saja Begum was cooking dinner when her son walked into the kitchen with a stricken look on his face. “Mom,” he said. “I have been bitten by a snake. I am going to die.”

Ms. Begum could not call an ambulance: The Indian government had shut down Kashmir’s cellular network. She then began a panicked, 16-hour odyssey to find an antidote that could save her 22-year-old son.

While his leg began to swell and he grew faint, she trekked across a landscape of cutoff streets, security checkpoints, disconnected phones and hobbled doctors.

Two months after the Indian government revoked Kashmir’s autonomy and imposed harsh security measures across the Kashmir Valley, doctors and patients here say the crackdown has taken many lives, in large part because of a government-imposed communication blackout, including shutting down the internet. 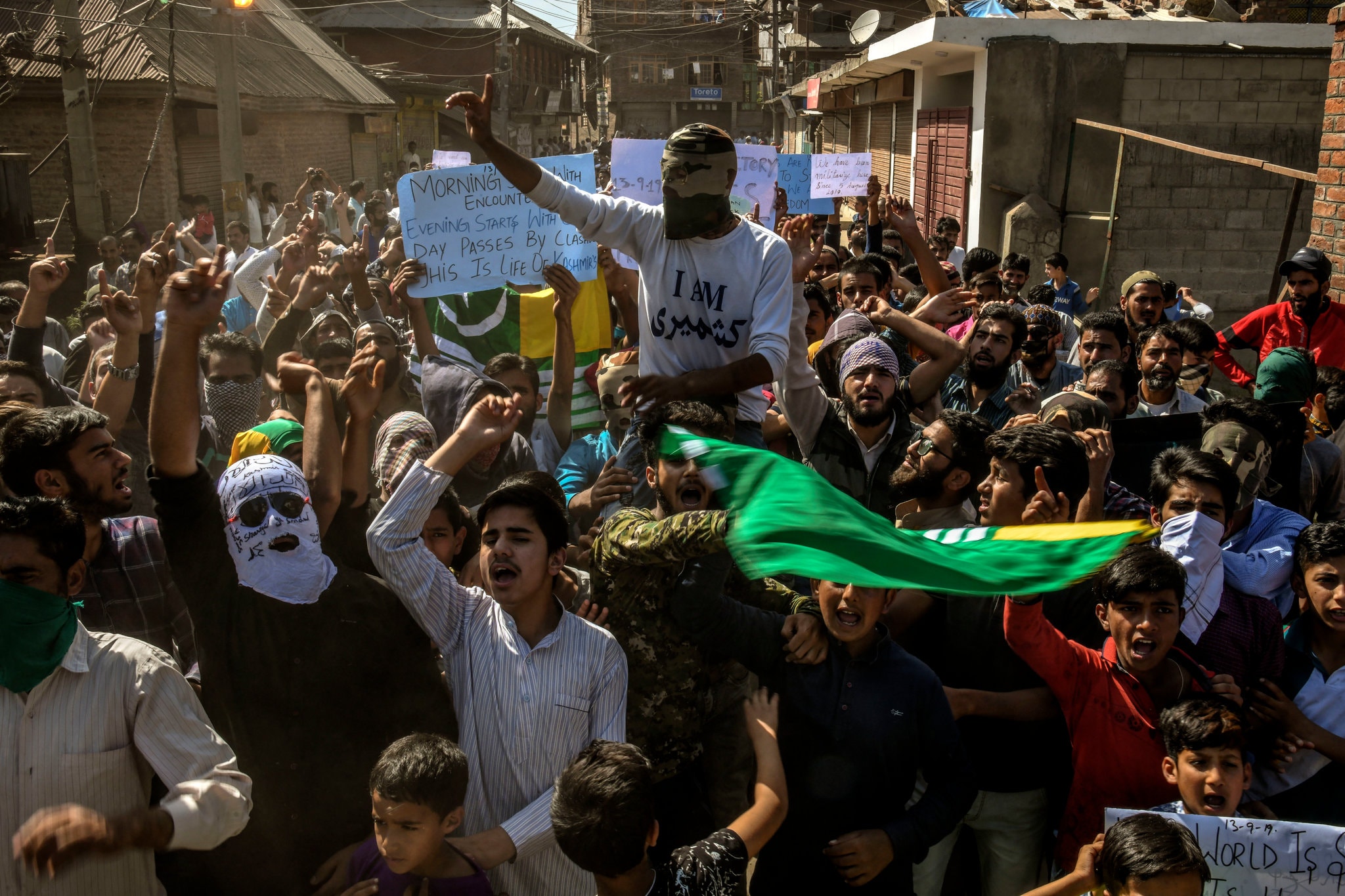 Cancer patients who buy medicine online have been unable to place orders. Without cell service, doctors can’t talk to each other, find specialists or get critical information to help them in life-or-death situations. And because most Kashmiris don’t have landlines in their homes, they can’t call for help.

“At least a dozen patients have died because they could not call an ambulance or could not reach the hospital on time, the majority of them with heart-related disease,’’ said Sadaat, a doctor in a Kashmir hospital who did not want to be identified by his full name out of fear or reprisals.

Many doctors interviewed for this article said they could be fired for even speaking with reporters.

Indian officials reject those accusations, saying that hospitals have been functioning normally, even under the restrictions, and that health care workers and emergency patients have been given passes to allow them to travel through checkpoints.

“There was no loss of life caused by restrictions,” said Rohit Kansal, a government official. “We have saved more lives than we have lost.”

But several health officials, based on hospital records, estimated that hundreds of people have been left in an emergency situation without ambulances, and that many may have died as a result of that and other communication problems, though there are no centrally compiled figures.

“People have died because they had no access to a phone or could not call an ambulance,” said Ramani Atkuri, one of more than a dozen Indian doctors who signed a recent letter urging the Indian government to lift the restrictions.

A new WhatsApp group called Save Heart Initiative that had helped in more than 13,000 cardiac emergencies and been celebrated in the Indian media as a Kashmiri success story has been rendered virtually defunct. Hundreds of Kashmiri doctors, and even some in the United States, were part of the group, uploading electrocardiograms and other vital information and then getting life-saving advice from one another.

With no internet in the Kashmir Valley, doctors there can’t use it.

Doctors at Sri Maharaja Hari Singh Hospital in Srinagar, Kashmir’s biggest city, said there had been a 50 percent dip in the number of surgeries in the past two months because of the restrictions, as well as because of drug shortages.

Several young doctors said their work had been particularly hampered by the loss of mobile phone service. When they needed help from senior doctors, they lost precious time racing around the hospital searching for them.

For Ms. Begum’s family, time had become the enemy.

On Aug. 13, her son, Amir Farooq Dar, a student whose college has been closed since early August, was tending his family’s sheep in an orchard near the town of Baramulla when he was bitten by a krait, a poisonous snake.

Most bites are fatal unless Polyvalent, an antivenin medication, is injected in the first six hours. Ms. Begum cinched a rope around his leg, hoping it would slow the poison. She then ran, with her son leaning against her, to the village public health center, which usually stocks the antidote. The center was closed.

She shouted for help and begged for a ride to Baramulla’s district hospital. But doctors there were unable to help, the family said, because they could not locate any antidote. They then arranged for an ambulance to take the young man to a hospital in Srinagar.

Soldiers stopped the ambulance many times on the way, the family said. Mr. Dar was slowly closing his eyes. He told his mother, in a drowsy voice, that he could not feel his right leg.

At least two hours had passed.

On Aug. 5, the Indian government unilaterally revoked the special autonomy that the Kashmir region, which is also claimed by Pakistan, had held for more than 70 years. It is ending Kashmir’s status as a full state in India and turning it into a federally administered enclave instead.

Hours before announcing the revocation, Indian officials imposed a blanket of tough security measures, cutting off the internet and phone services and jailing thousands of Kashmiri political leaders, academics and activists. It also imposed a strict curfew, limiting movement in the Kashmir Valley, home to approximately eight million people.

Some of the movement restrictions have been eased and some landlines are working again, but many Kashmiris say their lives remain paralyzed.

Kashmir has been racked by a separatist conflict for years, and Indian officials, including Prime Minister Narendra Modi, have said the new arrangement will bring peace.

But several Kashmiri doctors said dozens of preventable deaths might have happened because of the blockade.

In late August, a Kashmiri doctor, Omar Salim, a urologist, rode a bicycle on a deserted street to Srinagar’s hub of media offices, in a doctor’s apron, a poster hung to his chest. His plea: restore phone and internet service.

He was promptly arrested. Police officers let him go after a few hours with a warning not to do it again.

“We may not be in a formal prison, but this is nothing less than incarceration,” Dr. Salim said in a recent interview.

A cardiologist who works at a Srinagar hospital said he had recently received a patient who had suffered a heart attack. The patient needed a procedure that required the help of a specialized technician, but the technician was not at the hospital.

The doctor said that he and the technician managed to save the patient’s life, but that Kashmir has been “thrown into the Stone Age.”

Last month, Raziya Khan was pregnant when she developed complications. But she and her husband, Bilal Mandoo, who are poor apple farmers, live in a small village seven miles from the nearest hospital and couldn’t call an ambulance because of the phone blockages.

The couple walked the seven miles, taking hours because of her worsening condition. They made it to the hospital, but were then sent to a bigger hospital in Srinagar. It was too late, and they lost their baby.

“Had there been a phone working, I would have called an ambulance right to my house,” Mr. Mandoo said.

After hours of desperate searching for antivenin that could help Mr. Dar, the young man bitten by the krait, and a terrifying ambulance ride through security checkpoints, he and his family finally made it to Soura Hospital in Srinagar.

The bad news came yet again: Soura Hospital had none of the antivenin, either.

What the family did not know then was that the first hospital they had visited, in Baramulla, actually had the antidote in a locked storeroom. But the clerk who controlled the storeroom had not been around and was not able to be reached by phone.

In Srinagar, the family traveled frantically from pharmacy to pharmacy pleading for the antidote. Nothing. They arrived at the gate of an army camp, which normally stocks the antivenin, but were told to come back the next day.

After every failed trip, Ms. Begum shouted at her husband, Farooq Ahmad Dar, “Sell everything, but save him!”

Mr. Dar, 46, said he had never felt so helpless. “I felt like pushing a knife into my chest,” he said.

At 10:30 a.m. the next day, 16 hours after he was bitten, the younger Mr. Dar died. His parents then traveled 55 miles back home, in an ambulance, with his body.

The antivenin arrived two days later at the hospital, from a city more than 150 miles away. It came in 30 vials in a van along with other medicines.

The Role Of Urban Foraging In Building Climate-Resilient Food Systems