When I visited the United Kingdom for an academic sojourn in September 2016, Brexit was a done deal and the air was pregnant with expectation. A public vote — or referendum — had been held on 23 June 2016, to decide whether the UK should leave the European Union or remain part of it. Leave won by 52% to 48%. The referendum turnout was very high at 72%, with more than 30 million people voting — 17.4 million people voted for Brexit.

Wherever I went (and it was mostly to my University and a coffee shop in the city centre), I encountered people gearing up for a new kind of future. One as not being part of the European Union and all that that meant. On his last-ever world tour in Verona in May this year, Elton John had said, “I’m ashamed of my country for what it has done. It’s torn people apart … I am sick to death of politicians, especially British politicians. I am sick to death of Brexit. I am a European. I am not a stupid, colonial, imperialist English idiot.” This was a sentiment I came across often but one which carried a concomitant hesitation to do something about it.

To put it mildly, I encountered a nation happy to be cloistered in the future promises of faux neo-Colonialism, animatedly reminiscent of the ‘glory days’ of Empire and fervently hoping that Brexit would award back control to an island nation long resentful of mainland European heavy-handedness. The Remainers made up 48% of the voters, but their voices were not loud enough, their commitment to stay part of the EU not strong enough, their resentment at losing a way of life along with EU membership not expressed often and enough. In short, the Remainers had not done enough or were seen as having not done enough, to keep the status quo going.

In contrast, the Leavers were a vociferous, spirited lot; their hankering for a British exit from the EU boisterous enough to put paid to its opponents.

On a solo trip around Scotland, in a coffee shop, I was angrily-asked by a couple, who were (I can only surmise) Leavers to “Go Home!” and branded as “Bloody Foreigner(s)!” This because I had objected to their bullying ways on finding me alone and (to them) defenceless. In another unpleasant incident, I had my luggage thrown out of the coach luggage hold when I pointed out the rudeness of the bus driver in refusing to let me use the nearby public restroom.

Not restricted to being isolated events, these two incidents stand testimony to the impatience and haughtiness of the average British citizen. Impatience with anyone ‘not like us’ and haughtiness at the mere fact of ‘being born British’. Of course, there were exceptions, and they make for pleasant memories. But they were too few and far between to be counted as substantial or to have made much difference. Like the Remain campaign, like the anti-thesis of Elton John’s “stupid, colonial, imperialist English idiot”, those Britons who wanted to be European were too easily outnumbered and outmaneuvered by the Leavers. Even though just 4% separates them from the Remainers, the Leavers (52% of the British population) took over the public discourse around Brexit and muted out any dissenting voices in very conclusive ways. 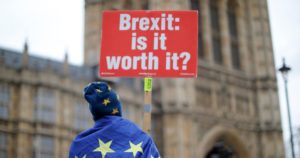 I encountered an overwhelmingly ‘closed’ Britain in 2016. Closed to the possibility of another Brexit referendum. Closed to the eventuality of a General Election. Closed to voices at variance with the popular Brexit Leave campaign. Open only to an echo-chamber-like rendering of their Leave narrative. Open to near-delusional promises of the return of a colonialist past long gone. Open to the out-of-tune lullaby of all things Empire and a desperation to find a modern-day version of the greatness of Britain at the cost of truth, reality and sanity.

Nothing I read in the papers or see on the telly seems to indicate that anything has changed in the Britain of 2019, three years gone by and counting. If anything, the voices of Brexiteers only get more jarring, shriller and frankly, miasmatic. The very air is putrid from the constant belligerence of Leave politicians and the uninspiring, almost non-existent leadership of the Remain camp.

This is not the Great Britain I had expected to encounter when I went to Uni there. What I had hoped for was a vibrant nation peopled by a spirited multitude; one not shy of dissent but ready to stand its ground in a principle-based confrontation; one full of a sprightly population of youthful students, teachers and researchers; one setting the example in higher studies which were at once, rigorous and rewarding; one which gifted its youth a vivacious European milieu, not made them props of a closed British-ness.

As Liam Gallagher puts it in his song “Chinatown”, in the end, it is all about conviction. The conviction to stand up and be counted — for a way of life, for a past which was illustrious albeit chequered, for a future which could yet be sublime.

What Do Tactical Nuclear Weapons Mean For The War In Ukraine?