Hundreds stand to be displaced as the Adityanath government moves ahead with plans to build a 221-metre tall Ram statue in Ayodhya.

The idea of Ram Rajya cannot be realised by displacing families and erecting a statue on our lands,” says an irate Triyugi Narayan, a resident of Mirapur Doaba in Ayodhya. “There is enough government land lying vacant around the city; this statue should be built elsewhere.” Narayan, a 73-year old priest, and his family are among the 200-odd families who face eviction from their homes because the Adityanath government plans to construct a 151-metre tall bronze statue of Lord Ram, at an estimated cost of Rs 200 crore.

The proposed chhatra’ atop the statue will add an additional 20 meter to the height and, along with the 50 meter pedestal, it will make it the world’s tallest statue, at 221 m. Taller even than the recently-built 182-meter statue of Vallabhbhai Patel in Gujarat.

Mirapur Doaba, where Narayan and his wife live with their two cows, is on the banks of the Sarayu, ensconced between a newly-constructed, four-lane national highway, a railway bridge, and the old highway connecting Faizabad to Gonda. The statue — in which Ram is to be shown wielding a bow and arrow — will loom over this land and make for a compelling sight.

The river is set to be diverted so that the water runs along the pedestal. The idea is to create an impression that the statue is standing upon a sliver of land in the middle of the river. The pedestal will house a museum and an audiovisual facility that will showcase the history of Ayodhya and the genealogy of Lord Ram.

After speaking to district officials, it is clear that the government has strategically chosen this plot as it is easily accessible. “We did not want a piece of land where we would have to build everything from scratch,” says a revenue officer who did not want to be named. “At the moment, the district administration teams are surveying the area to assess the compensation amount that each displaced family will be paid.” (
Mirror tried to reach the District Magistrate, but was unsuccessful in doing so.)

The villagers are dead opposed to the project. They say that even the survey process has been faulty, because many of their names have been left out of the two lists — of residents whose land or property will be acquired for the project — that were published in the local newspapers by the district administration, the latest one on June 27.

Dr Murli Mishra, general secretary of the local committee opposing the land acquisition, claims that “there are at least 150 constructed houses and more than 300 plot-holders. But in both lists, the government has left out the names of at least 150 people. If the government is not even counting them among the affected, how will they ever be compensated?” Mishra works as a lecturer in a nearby private college, and runs a shop that sells cement and other construction material. His evenings are now spent in mobilizing crowds and rallying everyone for the cause.

It was the first survey, published in a local newspaper in early June, which triggered the protest against the project at the District Magistrate’s office. The survey was undertaken to identify the plots and homes the government will need to acquire for the statue. “I have spent more than Rs 20 lakh in building my house,” says Mishra, who has been living in the village for the last 15 years. “While accounting for the compensation, government officials haven’t factored in how much I paid for the expensive tiles and the work that went into re-doing the ceiling, doors, grills, floors and such. They are merely registering it as a plastered house with walls and a ceiling.”

If you go by the existing circle rate (government land rates) for the area, the value of the 28.24 hectares of land to be acquired, is around Rs 38 crore. The UP government’s own rules on land acquisition state that the compensation amount should be four times higher than the value in case of rural land, and double in case of urban plots.

(Left) Maya Debi lives with her son and his wife in a two-room house without plaster; Shankar Yadav has been living in Ayodhya for the last 28 years

For people like Maya Debi, 55, and Ram Narayan, 60, who live with their son and his wife in a two-room house without plaster, the Ram statue project might put an end to their dreams of spending their last few years in holy Ayodhya. “We saved up money, borrowed from others and bought a small plot here for Rs 12 lakh,” says Maya. Her family used to live in a tiny house, in a rundown building, in Ayodhya’s Janaki ghat area. “We never expected our land to be acquired. On the advice of a property dealer, we paid a stamp duty of less than Rs 12 lakh — the amount for which we actually bought the land. But the government is not going to consider this. Even if it pays us as per the norm, it will not be enough. Where will we go, at this age?”

The village committee, which is contesting the land acquisition, has sent a ‘letter of disagreement’ regarding the proposed project, to the state tourism department and the chief minister. In it, the committee clearly states that it opposes the proposed land acquisition, and suspects that “the district administration, on the orders of the state government, will either harass [residents] or forcibly acquire their homes and lands”.

Besides private homes and land, a decade-old Hindu ashram ‘Fatik Shila’ and a government-sanctioned housing area for lepers also face an uncertain future. The residents of the ashram, at first, refused to voice their concerns. But later, the mahant, Ramagya Das, said that he hopes the government will allow the ashram to stay, and is “closely watching the situation”. It is evident that the ashramites don’t want to ruffle any feathers.

The 35 families residing in the “leper colony”, on the other hand, are certain they will be uprooted. They have, however, not heard from the administration about the impending relocation. “We are happy here, but since we are at the mercy of the government, we can only pray that they would find us a suitable place, in case we have to move,” says Shankar Yadav, who has lived here for the last 28 years. Shivshankar, a small farmer from the SC community and owner of 1.5 bighas of land, says it was on his farm that the flagpole demarcating the site for the proposed statue, was planted when chief minister Adityanath visited Mirapur Doaba in November last year for Diwali. Keen to portray his government’s commitment to building the Ram temple at the disputed site, Adityanath had announced a slew of projects in Ayodhya, and the ‘grand statue’ of Ram was the biggest of them all.

Making it one of his government’s top priorities, Adityanath had said during his visit: “Ayodhya’s identity is associated with Maryada Purushottam Bhagwan Shri Ram. There will be a statue for worshipping inside the temple, but the other one will establish the town’s identity.” The chief minister was clearly drawing from the rhetoric around the construction of the Patel statue, which had just been inaugurated a month before (in October 2018).

A number of villagers
Mirror tried to speak to about the issue, refused to comment, claiming the media is afraid to air their concerns. But people’s anger stems from the fact that the area being acquired, is both fertile and well-connected. Being riparian, the land is of high value. “I would be happy to give my land for the Ram statue, but first the government should give me a price that’s fair, and an equally good piece of land in return,” says Shivshankar.

There is also a caste dynamic at play. Most of those whose lands are to be acquired, belong to the general caste category, and are facing a strange dilemma. When asked if they seek support from Opposition parties like the Samajwadi Party and the Bahujan Samaj Party, Mishra admits that “being upper-caste, we are often identified as BJP supporters and therefore cannot seek help from others. People even mock us for having voted for the BJP.”

The government’s work around the Ram statue picked up only after the Supreme Court first deferred the hearing on the Ayodhya dispute — and then instructed that the parties go for a mediation under the supervision of a three-member committee, comprising retired Supreme Court judge FMI Kalifulla, senior counsel Sriram Panchu and Art of Living founder, Sri Sri Ravi Shankar. With the mediation now almost complete, the committee has to present its findings before the court by August 15. By all indications, it appears that none of the main parties — such as the Sunni Central Waqf Board and the Hindu parties — have agreed to a solution that is acceptable to all.

Given this situation, the Ayodhya case may, once more, revert to the Supreme Court for trial — and with that, the BJP governments at both the Centre and in UP will come under tremendous pressure from parties like the Shiv Sena and other Hindu groups to ‘clear the way’ for a grand temple. It is to deflect this criticism that the Ram statue project is being touted as a pet project of the Adityanath government.

The UP government has repeatedly clarified that the statue will be built through CSR money and private donations, though the infrastructure around it — like roads and other civic amenities — will be created by the government.

BP Singh, Regional Tourism Officer, Faizabad, says: “Right now, we are at the stage of purchasing the land or acquiring it. Once that is complete, we will move to the next stage of developing the area. The statue will be built with CSR funds and public money. It will be constructed under the government’s Rajkiya Nirman Aayog, and soil testing and such is being carried out at the site. We will seek technical assistance from the government of Gujarat, which has successfully completed the Statue of Unity. I can’t comment on the timeline, but we hope to finish all other development in the area in the next two years.”

But what will happen to the people? Only god knows.

Valay Singh is author of
Ayodhya: City of Faith, City of Discord (Aleph) 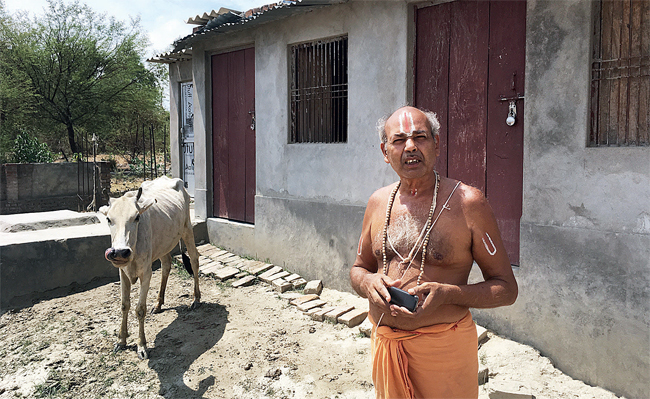 Mahesh Rai, 57, a priest from Mirapur Doaba, Ayodhya, is worried about losing his home

What Do Tactical Nuclear Weapons Mean For The War In Ukraine?