Jamaat-ud-Dawa chief Hafiz Saeed was arrested on Wednesday by Pakistan’s Counter Terrorism Department in Punjab province. Saeed was travelling from Lahore to Gujranwala when he was arrested, according to Geo News. He is the alleged mastermind of the terror attacks in Mumbai on November 26, 2008.

On July 3, the Counter-Terrorism Department had registered 23 cases against Saeed and 12 accomplices for using five trusts to “funnel funds to terror suspects”, The Express Tribune reported.

The Counter Terrorism Department filed the cases in five cities of Punjab province. It alleged that the Jamaat-ud-Dawa was financing terrorism from funds collected through non-profit organisations and trusts such as Al-Anfaal Trust, Dawatul Irshad Trust, and Muaz Bin Jabal Trust. The Jamaat-ud-Dawa is believed to be a front for the terrorist group Lashkar-e-Taiba. In March, Islamabad had added Saeed’s Jamaat-ud-Dawa and Falah-e-Insaniyat Foundation to its list of proscribed organisations.

An anti-terrorism court in Lahore had granted pre-arrest bail to Saeed and three others on Monday in a case pertaining to the outfit’s alleged illegal use of land for its seminary.

Saeed’s arrest came ahead of Pakistan Prime Minister Imran Khan’s visit to the United States, News18 reported. The move also followed a warning in June from the Financial Action Task Force, a global watchdog, that Pakistan could be put on its blacklist for not meeting the deadline to implement an action plan to curb terror financing. 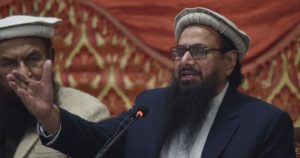 Hundreds Join Wangchuk On Final Day Of His Hunger Strike

‘Fraud Cannot Be Obfuscated By Nationalism’