United Progressive Alliance (UPA) Chairperson Sonia Gandhi on Tuesday, July 23, said that the Narendra Modi-led Bharatiya Janata Party government saw the Right to Information Act as a “nuisance” and was “hell-bent” on destroying it.

“It is a matter of utmost concern that the Central government is hell-bent on completely subverting the historic Right to Information (RTI) Act, 2005. This law, prepared after widespread consultations and passed unanimously by Parliament, now stands on the brink of extinction,” her statement said.

“The weaker sections of the society have benefited greatly by the proactive views of the RTI by activists and others,” she added, pointing out that the transparency law, brought in by the UPA-I government, had strengthened Indian democracy.

She further said that the move would amount to disempowering each and every citizen of the country.

The Lok Sabha passed the RTI Amendment Bill on Monday, July 22 amid stiff objection from the Opposition. Brought in by the Modi govt, the proposed changes to the salaries and tenures of Information Commissioners (ICs) in the States and at the Centre would severely undermine their independence. 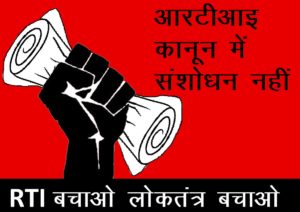 RTI activist and founder of Satark Nagarik Sanghatan, Anjali Bhardwaj ,has pointed out that the amendments would allow the government to exercise control over the Information Commissioners, thereby undermining the purpose of the law.

Protests were held across the country to oppose the said changes.

The Bill will have to be passed by the Rajya Sabha before it becomes law.

Right To Information Not Always Equal