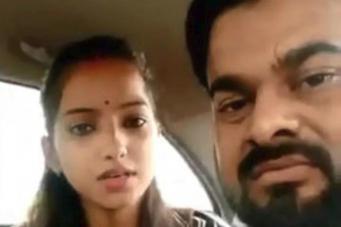 The daughter of a BJP MLA from Uttar Pradesh, who had moved the Allahabad High Court last week to seek police protection, citing threat to her life from her father after marrying a man outside her caste, appeared in court on Monday morning, amid kidnapping rumours and high drama.

The Allahabad High Court termed their marriage ‘valid’ and also directed the UP police to provide security to the couple. However, the couple’s lawyer alleged that the husband was assaulted outside the court room when the couple was leaving after the hearing.

Sakshi Misra, 23, daughter of Rajesh Misra, MLA from Bithari Chainpur in Bareilly, and her husband Ajitesh Kumar, 29, have been on the run since she announced her marriage last week. Ajitesh was allegedly assaulted by unknown people in black coats in the high court corridor, their lawyer said.

On seeing Ajitesh being beaten up, Sakshi immediately came to his rescue, after which the couple was asked to sit inside the court room, their lawyer said.

Earlier on Monday, Sakshi and Ajitesh, along with a few family members, reached Prayagraj for the hearing of the plea in which Sakshi had demanded security from her family. She also stated threat to her life from her family as she had married a Dalit boy against their will. The couple has now been provided security by the Noida Police.

It was being claimed that the couple had got married at the Ram Janki Temple on July 4, 2019. However, the priest of the temple denied solemnising the marriage. A marriage certificate going viral on social media has also been termed fake by the priest, who claimed that there is no provision of marriages at the temple.

Last week, Sakshi had uploaded a video on social media and said she has married Ajitesh. In another video, Sakshi alleged there is a threat to her life from her father, brother and an associate, and urged the Bareilly senior superintendent of police to provide her security. She also warned that if anything happens to her or her husband, she would ensure her father was put behind bars.

WHO Chief Accused Of Misconduct By Ethiopia