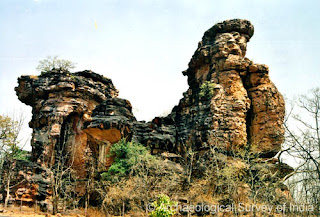 The world-famous Bhimbetka caves near Bhopal, Madhya Pradesh (MP) are home to pre-historic cave paintings and have been declared a World Heritage Site by the United Nations’ Educational, Social and Cultural Organisation (UNESCO). However, there’s another, less well-known village named Pengavan, in the vicinity of Bhopal, which has cave paintings dating back to the same time-period as the ones in Bhimbetka. But it has not received the kind of recognition as Bhimbetka, even though it has been surveyed by the Archaelogical Survey of India (ASI) as a place of historic value. Pengavan, with a population of 200, lies off the Bhopal-Vidisha road in the Raisen district and is about 50 kms from the capital.

“The last time the ASI conducted a survey here was in 1994. They demarcated the rock shelters/dwellings housing some rare cave paintings. After that, there has been no follow-up action taken,” informs Rajendra Kumar Thakur, sarpanch of Pengavan. Home to around 35 rock-shelters dating back to the Mesolithic Age, (the Middle Stone Age, from 10,000 – 6,000 B.C) the village lies off a narrow district road and the approach is difficult, especially during the monsoons. As Thakur says, “May be because the village is secluded, it has not attracted the kind of attention that Bhimbetka, which lies on the main state highway to Hoshangabad, has managed to get.”

Pre-dominantly made up of sedimentary rocks, the paintings done by pre-historic humans here depict scenes from the battleground, depictions of daily lives and some rare, strange drawings. “A couple of paintings found here very rare and have not been found even in Bhimbetka or other rock shelters across the country. One of them depicts an elaborate drawing of an eagle, in addition to four-five people seated in a circle. The detailing in this painting is painstaking,” informs Dr Narayan Vyas, superintendent archaeologist, ASI, Bhopal. “The other rare etching is that of a chakravyuha (a formation of seven concentric circles), which has only otherwise been found in the Altamira Caves in Spain and in some parts of England and France,” adds Vyas.

The red colour used in the cave paintings here, which has withstood millennia of weathering, is made from the laterite rocks found in abundance in the area. The scenes depicted are simple yet intricate line drawings of cattle (cow, oxen, goat, sheep), wild animals (antelopes, tiger, elephants), religious rites and burials, communal dancing and drinking as well as the natural environment of pre-historic humans. “The striking thing about the Pengavan rock shelters is that they have some paintings in white colour as well, which date back to the Copper Age. There are also paintings of horsemen and even a chariot, which is again quite rare,” says Vyas.

Since the rock shelters are in close proximity to the village’s population, there’s the threat of disfiguration and damage to these millennia-old paintings. However, as Thakur puts it, “The locals take their cattle for grazing around the village but they revere the signs and symbols depicted in the rock shelters. Till date, no damage has been done to the cave paintings by any villager.”

‘Muslims Will Never Allow Taliban Mindset To Surface In India’

Recording Mangrove Damage From Cyclones In The Sundarbans