Robert Mugabe, the bush war guerrilla leader who led Zimbabwe to independence in 1980 and crushed his foes during nearly four decades of rule as his country descended into poverty, hyperinflation and unrest, died on Friday. He was 95. 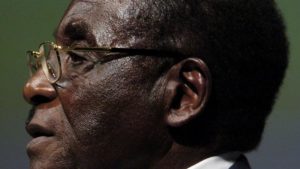 He was one of the most polarising figures in the history of his continent, a giant of Africa’s liberation struggle against colonialism, whose rule finally ended in ignominy when he was overthrown by his own army.

“It is with the utmost sadness that I announce the passing on of Zimbabwe’s founding father and former President, Cde (Comrade) Robert Mugabe,” a post on President Emmerson Mnangagwa’s official Twitter account said.

Tributes poured in from African leaders. The South African government sent condolences on the death of a “fearless pan-Africanist liberation fighter”. Kenya’s President Uhuru Kenyatta mourned a “man of courage who was never afraid to fight for what he believed in even when it was not popular.”

At home, even his foes paid their respects.

“He was a colossus on the Zimbabwean stage and his enduring positive legacy will be his role in ending white minority rule & expanding a quality education to all Zimbabweans,” tweeted David Coltart, an opposition senator and rights lawyer.

Mugabe died in Singapore, where he has often received medical treatment in recent years. In November, Mnangagwa had said Mugabe was no longer able to walk when he had been admitted to a hospital in Singapore, without saying what ailed him.

Mugabe was feted as a champion of racial reconciliation when he first came to power in a nation divided by nearly a century of white colonial rule.

Nearly four decades later, many at home and abroad denounced him as a power-obsessed autocrat willing to unleash death squads, rig elections and trash the economy in the relentless pursuit of control.

When he was ousted by his own armed forces in November 2017, his resignation triggered wild celebrations across the country of 13 million. For Mugabe, it was an “unconstitutional and humiliating” act of betrayal by his party and people.

Confined for the remaining years of his life between Singapore and his sprawling “Blue Roof” mansion in Harare, Mugabe stayed bitter to the end. Last year, before the first election without him, he said he would vote for the opposition.

Mugabe took power in 1980 after seven years of a liberation bush war, with a reputation as “the thinking man’s guerrilla”. He held seven degrees, three earned behind bars as a political prisoner of then-Rhodesia’s white minority rulers.

Later, as he crushed his political enemies, he boasted of another qualification: “a degree in violence”.

In fiery speeches throughout his rule he painted his actions as a just response to a racist colonial legacy that concentrated wealth in white hands. But when his followers seized white-owned farms, output cratered and southern Africa’s breadbasket could barely feed itself. He blamed a conspiracy by a hostile West.

As the economy imploded starting from 2000 and his health eroded, he found fewer people to trust as he seemingly smoothed a path to succession for his wife, four decades his junior and derided by critics as “Gucci Grace” for her luxury lifestyle.

“It’s the end of a very painful and sad chapter in the history of a young nation, in which a dictator, as he became old, surrendered his court to a gang of thieves around his wife,” Chris Mutsvangwa, leader of Zimbabwe’s influential liberation war veterans, told Reuters after Mugabe’s removal.

Born on Feb. 21, 1924, on a Roman Catholic mission near Harare, Mugabe was educated by Jesuit priests and worked as a primary school teacher before going to South Africa’s University of Fort Hare, then a breeding ground for African nationalism.

Returning to then-Rhodesia in 1960, he entered politics and was jailed four years later for a decade for opposing white rule. When his infant son died of malaria in Ghana in 1966, Mugabe was denied parole to attend the funeral, a decision that historians say added to Mugabe’s subsequent bitterness.

After his release, he rose to the top of the Zimbabwe African National Liberation Army guerrilla movement, becoming prime minister and then president after the war.

“You have inherited a jewel in Africa. Don’t tarnish it,” Tanzanian President Julius Nyerere told him during the independence celebrations in Harare.

His departure from power failed to lift Zimbabwe’s economy, however, which remains in its worst economic crisis in a decade. Triple-digit inflation, rolling power cuts and shortages of US dollars and basic goods have revived memories of the hyperinflation that forced it to ditch its currency in 2009.

Case For The Overhaul Of Water Mgmt Mindset