Delhi Police has filed two FIRs against JNU students’ union leader Aishe Ghosh and several other people for allegedly vandalising the university server room and attacking security guards on Saturday. The FIRs were filed at 8.39 pm and 8.43 pm on Sunday – around the time Ms Ghosh and other JNU students were being brutally attacked by a masked mob wielding iron rods and sledgehammers – and claim Ms Ghosh “indulged in physical violence”, “pushed lady guards” and “threatened” guards. 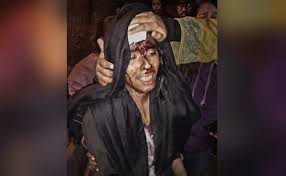 Another FIR was filed at 6.26 pm on Sunday in connection with mob violence on JNU campus that left 34 people, including students and faculty injured. Ms Ghosh was among the injured. The case pertaining to Sunday’s attack is being handled by Crime Branch but no arrests have been made yet.

University officials have claimed a group of students, led by Ms Ghosh – who is President of the students union and Saket Moon – who is Vice President – broke into the server room on Friday and vandalised servers to hamper registration ahead of the winter semester.

Officials said they sought to restore servers but “miscreants” re-entered around 1 pm on Saturday and again damaged them. Servers were restored for a second time around 4 pm, university officials said.

JNU Students Union hit back and said the university administration used “masked” security guards to destroy the server room and attack students. “They were shamefully wearing masks. JNUSU president was openly slapped,” the JNUSU had alleged.

The JNU administration has claimed the server incident is related to an ongoing standoff between students and the university over a hike in hostel fees. They say the protesting students damaged the server to stop students from registering for the winter semester.

They have also claimed that Sunday’s violence was linked to the attack on the servers.

Ms Ghosh, who was elected as JNUSU President last year, said the students’ body had been trying hard to resolve the issue. “The Jawaharlal Nehru University Teachers’ Federation (JNUTF) threatened us recently amid the ongoing protest against fee hike. We want amicable resolution,” she said.

A blame game has erupted over Sunday’s attack, with the ABVP, the BJP-linked student group, and Left-backed students’ groups accusing each other of the violence.

Delhi Police, which has come under heavy criticism for its conduct during the attack, yesterday filed a single FIR that named unidentified persons and clubbed together multiple complaints.

What Is COP27 And Why Is It So Important?

What Is COP27 And Why Is It So Important?